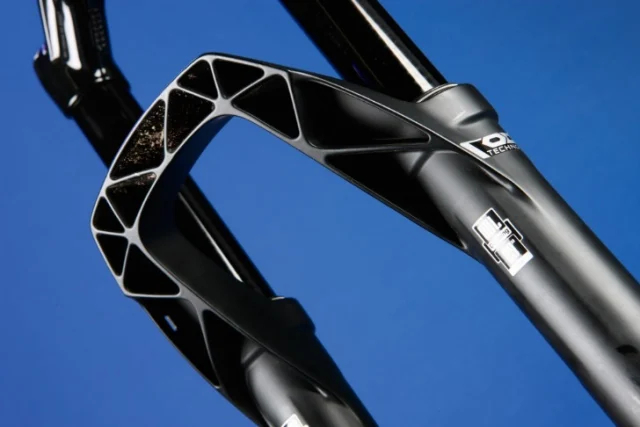 Products are getting more complex, with organic shapes increasingly being specified to achieve the required strength while minimizing material use. There is also a trend for reshoring and producing goods closer to the market where they are sold. The usual business case for close-to-market manufacturing is being able to respond quickly to increasingly dynamic markets. Reducing the carbon footprint involved in transporting goods and making supply chains more resilient are also important drivers. The current need for an urgent ramp-up in ventilator production has sharply brought into focus the need to respond rapidly to increasing demand with a resilient supply chain. Additive manufacturing (AM) plays into both trends. It is making people believe that products can be any shape we like and that they can be locally produced. In reality, AM has little scope to replace conventional production in the foreseeable future. Issues with material properties, feedstock costs, machine costs and build speeds mean that AM will remain a relatively niche process.

This article gives a detailed overview of another highly automated manufacturing process that can produce complex shapes in high-strength alloys. Die-casting may not be a new technology, but it is very well-suited to many modern products. I recently reported on how European bicycle manufacturers are reshoring production as demand for high-quality e-bikes ramps up rapidly. These are sophisticated machines that use aerospace-grade materials with correspondingly high prices. In that article, I noted the importance of automation when reshoring production into high-wage economies and identified high-pressure die casting as the most highly-automated process for high-quality bicycle frames. High-pressure die casting is a highly automated process that can economically produce parts with very complex shapes. It is typically suited to high-volume production. This article explores the process in detail, looking at tooling requirements, breakeven volumes, material properties and surface finish.

The die-casting process uses a permanent metal mold, or die. Molten metal is forced into the die cavity at a pressure of between 0.7 MPa and 700 MPa. Die casting is essentially the same process as injection molding. The term injection molding refers to the production of plastic parts while die casting involves production in metals. Die casting is most suited to softer alloys. In the past, tin and lead were popular materials for die-cast parts, such as toy soldiers. Today, zinc, aluminum and magnesium-based alloys are most common. High-strength structural automotive and aerospace components are produced, as well as many consumer goods.

Each injection, is known as a shot. A shot may be made up of more than one casting or part, as well as the scrap material that is produced during the casting process. Scrap includes the sprue, where the material enters the die; the runners, which distribute material to multiple part cavities; and the gates, where the material flows into individual part cavities. Sprues, runners and gates are found in other types of casting as well as in injection molding. If you’ve ever made an Airfix model, you will remember receiving the parts still attached to the shot. You may have also sometimes had to trim away flash, a thin layer of material that has leaked into the interface between the two halves of the mold. The parts are attached to the gates and joined together by the runners. In industrial casting processes, the individual parts must be separated from the scrap. This process is known as shakeout and may be carried out using a trim die in a press. 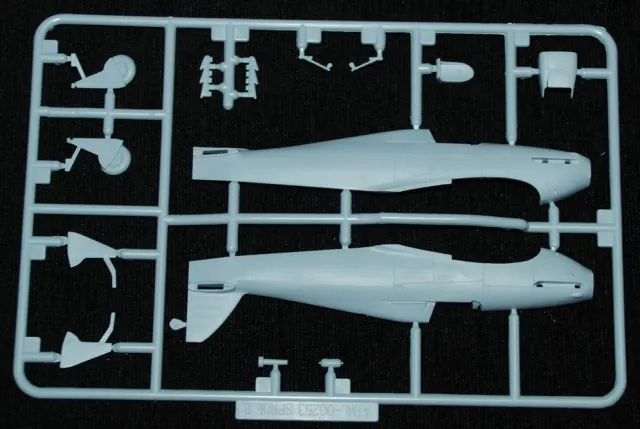 The die is made in two halves so that the shot can be removed. One half of the die is fixed and contains a hole through which the molten metal is injected. The other half is closed with a press that must be able to resist the pressure of the metal being injected. This pressure can be considerable, resulting in die casting machines being very large and heavy. Molten metal enters an injection cylinder, known as a shot chamber, and a piston then injects it through a nozzle into the die.

Die casting is normally categorized into two basic types, depending on whether the shot chamber is heated: 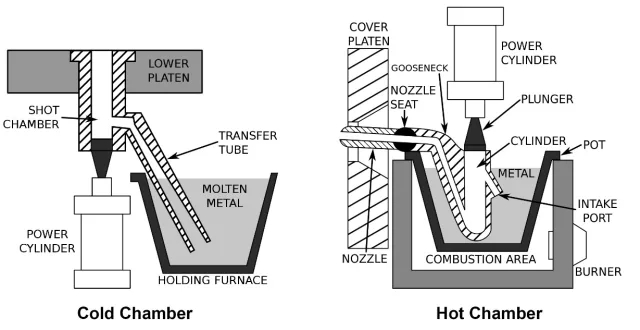 Dies typically weigh 1,000 times the weight of the part being produced, so a 3kg part will require a 3,000kg die. Dies often include additional cooling channels, which must be machined and hardened. Ejector pins are also required to remove the part after it has been cast. Dies must be able to withstand the thermal shock of repeated thermal cycling and should not soften at the shot temperature. Hardened tool steel is normally used. These considerations mean that dies represent a considerable capital expense. Surfaces running in the direction of die separation must be designed with tapered faces, known as draft angles, to enable removal from the die. If overhangs are required, moveable cores or slides must be included in the die, which can greatly increase complexity and cost.

Thin walls of just 0.4mm are possible. In fact, thinner walls generally improve material properties as the more rapid cooling reduces the size of crystals in the solidifying metal, resulting in a fine grain structure. Dimensional accuracy and surface finish are also excellent for a casting method. For small parts, accuracies of 0.1mm are possible and surface roughness can be as low as one micrometer. It is also possible to include inserts such as steel bearing housings and threads during the casting process.

Although dies represent a significant cost, the greatest capital investment is in the die-casting machine itself. The time required for die changes varies between a few days and a few hours. Many foundries focus on high-volume production, but die-casting can be economical with batches of 500-2,000 parts. Some parts are even produced in volumes as small as a few hundred a year. Once the die is available, it becomes easy to rapidly ramp-up production.

This ability to suddenly increase production rate has been dramatically demonstrated in the challenge to produce ventilators for the Covid-19 pandemic. One die-casting company I spoke to recently, MRT Castings, produces 21 parts for an existing ventilator design. Normally, these are produced in small batches. Because they already have the tooling, they were able to perform die changes on their casting machines and focus their production on ventilators in just a few hours. This meant that the production rate was immediately increased five fold.

The two classes of material typically used for structural die-cast parts are aluminum and magnesium alloys. Thin-walled parts and optimized casting processes are often able to achieve fine-grain structures. However, a major challenge for achieving high-strength cast parts is porosity caused by tiny air bubbles becoming trapped in the molten metal. High pressures are required to squeeze metal into intricate molds, especially if rapid cycle times are required. However, this also causes turbulence that traps air and increases porosity. This has two negative effects. First, the voids themselves weaken the material, especially in terms of fatigue performance, by acting as crack initiation sites. Second, the presence of small air bubbles can prevent heat treatment being carried out, which is particularly important for aluminum alloys.

Optimizing mold design and casting parameters can reduce turbulence. Most foundries now use flow simulation during mold design, which can reduce turbulence and optimize cooling. Real-time shot control can further improve the properties of cast parts. Applying a vacuum to the mold can help prevent porosity forming while injecting oxygen can cause rapid oxidation in pores, filling them with metallic material.

Semi-solid die casting is another variation on die-casting suitable for producing high-strength parts. Instead of fully melting the metal, it is heated to just below its melting temperature. It, therefore, shares some properties with forging as well as casting. Porosity can be virtually eliminated, which means that excellent ductility and fatigue resistance can be achieved. It also enables full heat treatment and welding. A major challenge for semi-solid casting is the process control of temperature and mixing required to maintain the semi-solid state. Although research demonstrated that semi-solid casting was possible in the early 1970s, these difficulties meant it took some time to become an industrial reality.

There are now a few practical semi-solid casting processes. Thixocasting was the first to become a commercial process in the 1990s. It is usually used for aluminum alloys and uses a pre-cast billet that allows the process to be controlled but makes it considerably more expensive. Rheocasting was developed a little later, which is also for aluminum alloys. It reduces cost by avoiding the need for pre-case billets. Rheocasting allows both primary and secondary metal sources to be used, even scrap of the right composition, and offal can be easily recycled.

Thixomolding is another semi-solid casting process that produces parts in magnesium alloys. Machines are fed with chipped material from a hopper into a heated barrel containing a screw conveyor. This feeds the magnesium chips while mixing them to create a globular semi-solid state. Thixomolding machines resemble the injection molding machines used for plastics, and they can operate in fully automated cells.

Aluminum, magnesium and zinc are the most common types of metallic alloys used in the die casting process. Traditionally, tin and lead were also popular.

For many years, the FAA refused to allow magnesium alloy in aircraft interiors due to flammability concerns. However, extensive flammability testing has now largely proven these materials to be safe, resulting in a relaxing of certification requirements. Compared to aluminum, it has a far higher damage tolerance. Its major advantage over carbon composites is that it is fully recyclable. Magnesium alloys are designated using the ASTM and SAE system, in which the first part denotes the two main alloying elements in the alloy and the second part represents their percentages. Elektron 43 is one magnesium alloy that has obtained AMS specification and is now included in the aerospace Metallic Materials Properties Development and Standardization (MMPDS) handbook. Allite Super Magnesium is a leading proprietary alloy with extremely good structural properties for high-strength, low-weight applications. It has been in use within aerospace and defense since 2006 and is now becoming more widely available.

Materials like aluminum alloys and carbon-fiber may have excellent mechanical properties, but their sustainability is not so great. They take a lot of energy to produce and, in the case of carbon fiber, is virtually impossible to recycle. Magnesium alloys are fully recyclable and have low embodied energy.

The Future of High-Performance Die-Cast Components

The transition to a low-carbon economy is now driving widespread industrialization of semi-solid casting processes. Electric vehicles require low-weight and high-strength components with performance close to that required in aerospace. However, this must be achieved in high-volume production using highly automated processes with costs comparable to traditional automotive production. Processes such as Rheocasting and Thixomolding offer a way to achieve this.